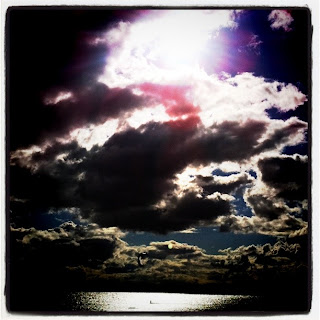 Well as you know the house move has gone well. Well enough that I'm back writing, which is nice. So I figure if I'm back writing I may as well reflect on recent events. Random events.

First I'll share with you a few shots from an event held on our street a few weeks ago. Let me explain. High Street Ardersier runs through to Fort George. Fort George is an 18th century fortress that remains in use today. It is a magnificent piece of kit and well worth the visit if you're in the area. It is situated on a peninsula that extends into the Moray Firth. The whole of the peninsula is occupied by the fort, but you can wander around pretty much at your lesiure any time you like - except for when the red flags are displayed. his, apparently, is when they are shooting live rounds of ammunition. The shooting ranges are quite surreal.


Anyway, there is just heaps of land that will likely never be sold or built out. It is kind of like having our very own National Park at the end of the street.

So where was I? Oh yes . . . a few weeks ago Historic Scotland put on a(n) (h)istoric weekend complete with military recreations from the ages, as well as mediaeval displays and modern weaponry demonstrations. It really was rather good. The highlight, of course, was the recreation dogfight between a Spitfire and a Messerschmidt (which we were able to preview on the Saturday from our backyard). 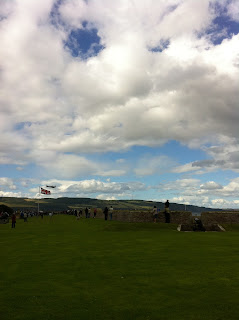 The photography of the dogfight was best left to the professionals, my camera phone just was not able to capture the majesty of the spectacle. You can see how close these things were getting to the ground from the above shot - but not much else. 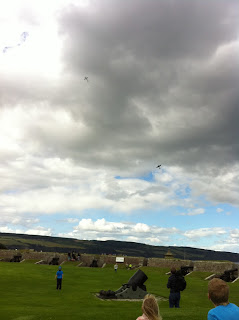 There was a lot to see. Many freaks folks dressed up in period costume. A lot of people went to a lot of effort for our entertainment. The barracks providing a spectacular backdrop. The major fail of the day was the manifestly inadequate catering options available. We were forced to have some manner of barbecued vegetable skewers on dry bread. I know it's a barracks after all, but to feed us like POWs? I'll let the remaining pictures speak for themselves (with some help from captions). 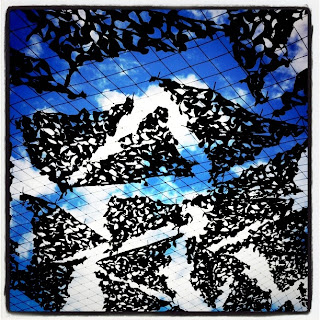 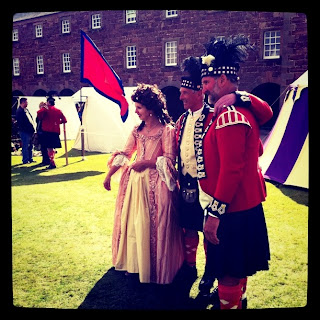 Also in the merry, merry month of August was our summer holiday to Sweden. I think the reason I haven't posted this already is that it was so good that I can't believe I haven't posted this already - if that makes sense. We flew over on the day after we had moved into our new home, so you can appreciate it has all been rather hectic.Edinburgh to Skavska (Stockholm) isn't the worst journey in the world, and even Edinburgh Airport (which is close to worst in the world) was strangely bearable this time around. Once we landed we commenced something of a game of TICKET FAIL. This is a new game wot we invented which consists of someone managing to stuff up as many ticket purchases as possible. Firstly we got a bus ticket from Skavska to Stockholm, instead of the ticket to Lindskoping. We were rather lucky to sort that out without loss or disaster. Then, once we were at Linskoping Station we realised we were slightly early for our train. I could segway here to a dissertation about the train habits of the British (habits that stretch my patience and boil my blood, not to mention stress me out) but that would be too weary a distraction. However, in the vein of poor British train habits our next attempt at TICKET FAIL was enacted. The train we were supposed to catch was an Inter-City train. The next train due at Lindskoping which stopped at Lund (our destination) was an SJ-X2000. The XJ-X2000 is a super-duper high-speed tilt-train (personal record for consecutive hyphenated words) that gets to Lund in 3 hours (instead of the good old Inter-City's 4.5 hours).

I suggested that we may not be able to do this. The ticket we had was clearly marked. But no, good old-fashioned British train etiquette won out. We would just try our luck. Signs seemed doubtful when it was apparent that not a single person was not sitting in an allocated seat. Had this been Birmingham-London or Aberdeen-Inverness you'd just have to take your chances. If any of the reserved seats aren't taken it's probably because those with reserved seats are sitting in non-reserved seats. Or that the reserved seat you paid for is now on a train that no longer has a policy of reserved seats. Or there is a family of chavs drinking Tennents and Buckfast in what were supposed to be your seats. Either way, you'll be leaning against a rail opposite the toilet for the length of your British journey. Sorry, did I get distracted? Anyway, here we are on a SWEDISH train that has EXCLUSIVELY reserved seats. Boarding such a train without a valid ticket is apparently such an uncommon occurrence that the ticket inspector lady had no idea what to do with us. This resulted in us making it all the way to Lund without being booted off the train, but it was a close run thing, and of course what you want from your holiday is all that stress, especially after already purchasing the wrong bus ticket.

But we made it safely to Lund, so I guess I should be grateful. Another thing this incident taught me was that (similar to my Zurich experience) everyone can speak English to varying degrees (and varying levels of American accents) and most are only too happy to help you in English (I guess as a simple way of brushing up on their language skills). This is nice.

So Lund. Lund is beautiful little city. It is about the perfect size. Described as a university town, Lund is small enough that you can walk (or cycle) comfortably from one side of town to the other in little time at all. And boy do they like to cycle! From wikipedia: "Lund has been praised for its cycling infrastructure. There are 5000 bike parking spaces in the town, including a multi-storey facility, 160 km of cyclepaths, and 45% of commuters travel by bicycle. There has been no increase in car usage for the past 10 years." Just fantastic. My kind of town. And the bikes were all way cool. Many were like my pride and joy old Indian town bike. I was in bike heaven. There was a bike in a shop window in Copenhagen (where we visited for a day) that was made of leather.


So here are a few random shots, helped once again by my friend Mr Caption.

The most remarkable thing occurred whilst we were walking through Stockholm (our only day in Stockholm) on the last day of our holiday. We took a couple of turns and vaguely followed some music, only to discover hundreds of American cars doing a street circuit of one of Stockholm's main streets. It was hilarious. I was like it was AMERICA DAY or something. Some cars had loudspeakers blaring out bad music, there were girls in rock-a-billy outfits, there was big hair, there were tattoos. In fact the only thing missing was AFB and Eddie Best. I miss you guys! Anyway, here's a couple of the gas guzzlers on display. 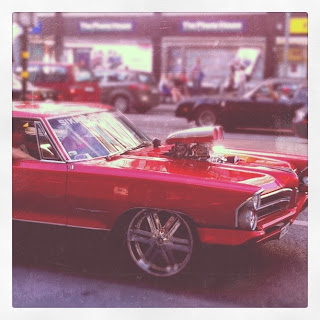 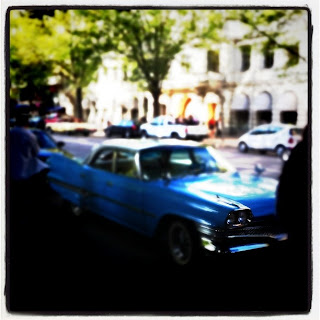 Department store shopping? Are you kidding? I go to Copenhagen for one day in my life and we end up in a major department store, doing the same thing we could have been doing anywhere else in the world. Sense of humour was not able to get out intact.


Copenhagen was kinda cool. Kinda grungier than Sweden, but wherever we went (especially the cafes) everyone looked like an architect or industrial designer. Could they all be any more cool?


Anyway, I've bored you all senseless by now without mentioning all of the good stuff, so I'll leave this off with big ups to Jen and her kids Lulach and Saorla for the most magnificent hospitality we could have hoped for. We will be doing it again sometime.