I've only just realised that I never told you all about Isaac.

I had planned a whole new blog called 'The New Daddy Blog', and I might yet. Y'see there is dearth little information on the intermaweb for us males of the species waiting to become fathers.

There are a couple of sites, but given us men are responsible for close on 100% of all pregnancies I was surprised at how few there were.

But enough of that, more of him! 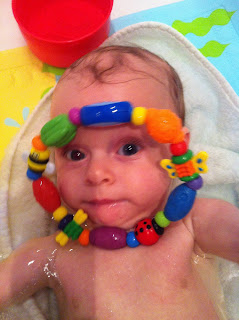 He put it there himself


This is close on the most recent photo I have of him. He is really enjoying his bath-times now, which is a massive relief as there was a period of a few months when he was having none of it. I think he liked his very first bath, but the second (I maintain) was a bit warm for him and spooked him out of it. He never seemed to fully recover, but now, like magic, he is one happy bath-boy. 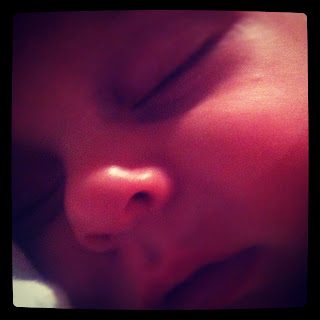 Adorable. I don't have to say it,  but I am programmed to say it.

We are genetically programmed to find our own children adorable. It's part of evolution and ensures we don't just leave our kids in the dumpster at Tescos. But wee Isaac Ising is probably the most adorable child I have ever met. Yes, of course I am biased, but look at him. He is the brightest, happiest, most alert baby. He seems much older and wiser than his (now) 5 months would indicate, without looking like one of those babies that looks unnervingly like an old person. He looks like a fully functioning toddler, despite the fact that he is still just a baby. What's not to love?

He is very unlike both his parents in that he is a very photogenic kid. It helps when you're happy most of the time and have a big gummy grin on your face. The gummy smile won't last long though. He's currently a little gurney (I think that's a Scottish saying but sounds like what it means) because he's teething. Terrible stuff. I have the occasional teething issues with my wisdom teeth and it's no fun at all. And I'm old enough to rationalise it all and put up with it. But he's such a delicate thing that it tears at your heart to see him struggling with the discomfort of it. Imagine a couple of little teeth in that mouth and he'll still be gorgeous. 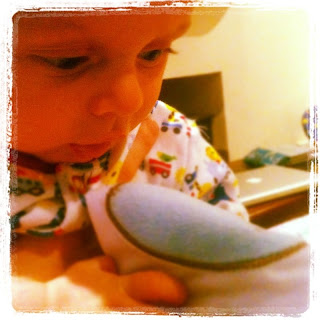 Getting him used to a bedtime routine has been a real challenge as well. There are plenty of books and plenty of advice from friends and family about how best to work this, but in many respects you just have to figure out what works best for you and your child. We're still trying to work out what works best for us and our child. One of the things that is hard for the books to prepare you is that as soon as you think you've got an aspect of it to a point you can move on from, something else happens in your child's development to set back your routine. Isaac seemed to be a little miracle and had seemed to work out how to drop a feed and sleep for close on six hours. This was a remarkable development at the ime, however it only lasted a few days before he kicked into another growth spurt and had to wake every two hours for another feed. Now, as I mentioned, it's the teething. As content as he now seems and as long as he can stretch from one feed to the next, if his teeth are bothering him in the middle of the night he's not going to settle no matter what you do. Even the baby Nurofen takes a while to activate!

But at bedtime we make sure to try to do the same things to help him differentiate night time sleep from day time naps. We read him books before bedtime (after his bath now that he can handle that, too) and each night end with the same soft-paged sleepytime book. It's a sign of our current babybrainess that it's only three pages long and neither of us can yet remember the words verbatim. He seems to like it and just this last week has reached another developmental milestone in his increased awareness of the things around him. No wonder he can't sleep - life's far too exciting right now. Now that you've met Isaac Ising I hope you will be seeing more of him.

It must only be a matter of weeks until his first words and first crawling (he nearly crawled yesterday), his first steps and his first solid food. He has just had his first real knock to the head. We were looking out the back window with him in his bouncy chair (pictured above) and I was distracted by another child who was staying with us for barely a moment and Isaac had tried to take his sock off or something and tumbled out of the chair onto the bench with a loud crash. Oh how he bawled. I nearly died. He had already had his morning dose of Calipol so that pain didn't last and, thankfully, neither did the screams. It didn't even bruise.

On a side note we did watch David Lynch's Eraserhead last night. Any of you that are new parents that haven't seen the film, don't! Having a new baby in the house puts a new and not altogether positive spin on the old classic.

Thanks for reading. I've missed you guys.

Craig, what a beautiful love story to your boy, one day you can show it to him and he will know just what a lovely daddy he has (and mummy of course). This touched my heart and made me remember when my babies were young (a long time ago) and how scary and wonderful, tiring and exciting that first year is. Full of discoveries for all and a love that knows no bounds and is forever. Lovely writing my old friend keep it up , jan xx

Maybe you have a new appreciation of your mother who had to handle two of you! We didn't have GOOGLE to go to in those days for advice. xoxo
He does look gorgeous though.

It's really useful for all peoples.

Maybe you have a new appreciation of your mother who had to handle two of you! We didn't have GOOGLE to go to in those days for advice.